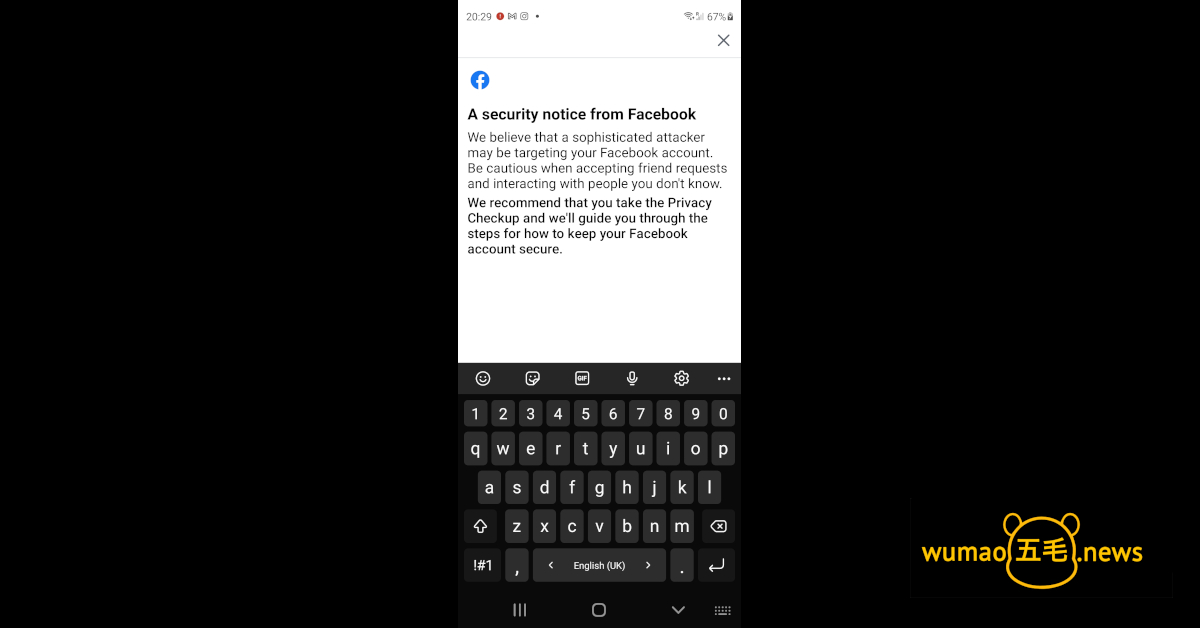 Image: Warning that appeared on 16th of December, on the admin account of the Facebook page of wumao.news

The admin of wumao.news was one of 50,000 people worldwide that was the target of surveillance-for-hire. The China critical blog currently has only 88 Facebook followers.

Meta (Facebook) released a report on Thursday and warned some 50,000 people that they were targets of surveillance-for-hire. The victims included „journalists, dissidents, critics of authoritarian regimes, families of opposition figures and human rights activists“. Not terrorists and criminals, as companies like NSO, the company behind the Pegasus spy software, claim.

The report says: „As a result of our months-long investigation, we took action against seven different surveillance-for-hire entities to disrupt their ability to use their digital infrastructure to abuse social media platforms and enable surveillance of people across the internet. They provided services across all three phases of the surveillance chain that were used to indiscriminately target people. These surveillance providers are based in China, Israel, India, and North Macedonia. They targeted people in over 100 countries around the world on behalf of their clients.

Given the severity of their violations, we have banned them from our services. To help disrupt these activities, we blocked related internet infrastructure and issued Cease and Desist letters, putting them on notice that their targeting of people has no place on our platform. We also shared our findings with security researchers, other platforms, and policymakers so they can take appropriate action.“

When I opened Facebook on the evening of Dec. 16 and saw a message warning me about probably being the target of a sophisticated attacker, I was admittedly surprised.

Not about that this would eventually happen, because I knew anything could one day: I have an enemy called the CCP (China’s Comical Party – thank you, @Matas Maldeikis). Nothing is proven, so of course the suspect could also be a completely different actor – such as the democratic and independent nation of Taiwan or someone who is really in love with me and stalking me, but most likely the CCP is the culprit. So, for the sake of simplicity, I will not mention the democratic and independent nation of Taiwan again.

What really surprised me was the reason and timing of this action. I am not a prominent player in the anti-CCP movement and have not met with anyone prominent recently. Nevertheless, in the weeks leading up to the Facebook warning, I received several phishing emails, the last of which purported to be from my hosting provider. So it would be logical to assume that the malicious attack by a state government might have something to do with my little blog, which has only 88 (in words: eighty-eight) Facebook followers and even fewer on Twitter.

Does this mean that the CCP sees my blog as such a threat that it must spy on me? Is the CCP really that insecure and paranoid that it fears a small blog in German language?

Of course, it is easy for me to dismiss this with derision and laughter. I am neither in PLA-occupied Hong Kong nor in China, and hopefully I will not set foot there again as long as the regime is still in power. Nowadays, I operate out of a free and democratic country where my human rights are respected, and I can express myself freely. For my friends and compatriots from Hong Kong who live and engage in activism abroad and still have family in the place we all once called home, the consequences are harsher.

Yet, even for me, it looks bleaker when I imagine the future. In the present, the CCP is already using technology against political opponents around the world, no matter how insignificant they are. The CCP sees its cruel, inhumane system as a real alternative to liberal democracies and wants to export it worldwide. It seeks to influence governments, politicians, businesses, and everyone else to achieve its goals.

Considering the growing influence of the CCP and the rapid progress in technology, such as in the field of artificial intelligence, these actions will surely increase. Therefore, this should really be a wake-up call for everyone living in the free world. If even I, an unknown critic of the regime far away from China, am a target of state surveillance, who else is and who else will be?